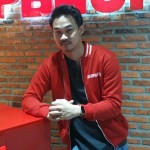 Yonathan Indra, Co-Founder and Country Head of ShopBack Indonesia, has successfully pushed the country to the top of the leaderboard within months of kick-starting operations in the archipelago.

Always at the forefront of creativity, Yonathan has led his young dynamic team to conceive different ways of garnering repeat purchases for ShopBack Indonesia’s merchants. The tactics deployed vary from online to offline, spanning from short term to long term. The team excels at marrying the practical aspect of Cashback with the emotional aspect of Community to drive customer loyalty.

Yonathan had extensive experience in navigating the ecommerce tech scene. He had steered the launch of Google Nexian Android One Project at Spice Group and led as the Vice-President of Strategic Marketing Partnerships at LAZADA prior to founding ShopBack in Indonesia. He also chaired the Harbolnas (National Online Shopping Day in Indonesia) committee in 2015.